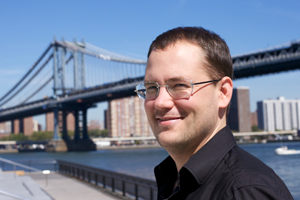 The fifth employee to join Nuxeo, Eric Barroca has worn many hats at the company. As CEO, he balances the roles of entrepreneur, strategist, leader and motivator, and remains a techie at heart.

You have been a bit of a globe trotter in the last couple years. What is the first thing you do to settle in when you move somewhere new?

I like to get groceries in my neighborhood and cook something at home. I don’t have a lot of things to lug around with me… Maybe the most important thing is liking the place where I am moving. I have been lucky with Paris, San Francisco, and New York.

I played with computers at home early on around 1995. I learned about development, and I learned software and network technology related to the Internet. I realized that the knowledge I had was valuable to some people somewhere. With the Internet bubble, I stopped school at 17 and started working right away–first for a startup doing training, consulting, and so on. In 2001 I joined Nuxeo.

Even in the beginning you were working with open source?

Yes, as a developer open source is a great way to learn. You have the source code. Every project is an opportunity to learn something.

Have you seen a change in the open source market?

I think the ubiquity of open source software all around us is a sign of market maturity. It enables massive group collaboration in a clear legal framework. The legal framework in turn is a great catalyzer for innovation. It lets people focus on areas where they can add value and lets them ignore the others.

What is a feature that doesn’t currently exist due to technology limits that you would love to see in the Nuxeo Platform?
We have some really exciting projects in the research phase for incorporating semantic technologies. People are creating huge amounts of data every day, but how can an organization extract and analyze text? For structured data we already have great tools at our disposal, but unstructured content is a huge challenge. Semantic technologies are very promising but it’s still early. As a topic it’s been around since computers have existed. But we are coming up on a time when new tools will be developed with new semantic capabilities.

What is the biggest challenge of running a small company?
The main problem is staying focused on what matters. Being relatively small means you have limited resources, so we have to avoid distractions, and focus on delivering great software to customers. But we also have to let ourselves get distracted just enough by what’s moving in the market and in the technology space, so we can get cool ideas to deliver with our great software. So that’s a tricky balance.

So it’s not public speaking? You don’t lay awake at night dreading your keynote at Nuxeo World 2012?

No, that doesn’t keep me awake at night. I am looking forward to it!

Is there something special happening in Europe as far as the open source software entrepreneurs?

Well, there is a pretty wide set of companies making open source software in the US as well.

I don’t think of Nuxeo as a European company. We have a strong presence in the US, and I see the States as Nuxeo’s main growth engine. We work for people all around the world, which is what makes what we do interesting. From the beginning our company story has been a global one.

When you create business infrastructure software, like we do, open source is just the logical way to start. Open source is how software gets written. We work with developers and architects. They look for open source solutions because it makes their lives easier. The open source nature of our project made it international from the start. That helped us grow and reach a large audience.

You’ve added support for cloud services in recent years. Were you concerned by any of the highly publicized cloud security breaches?
Our business is to help our customers build solutions for their users, but we are agnostic regarding the solution. We have to help them deliver the service in the way they need whether that means on-premises or by leveraging a cloud provider. We have built a set of tools and features to deal with provisioning, sysadmin automation and storage challenges. That’s what matters in the cloud era: achieving a very high level of automation so you can scale to hundreds, thousands, tens of thousands of customers or instances in an efficient and manageable way. The cloud is not about “running on Amazon,” it’s about scaling and performing in a highly virtualized and highly automated environment.In the case of security breaches, I have a feeling that you are better off with the Amazon or Google security team working on a breach than with a smaller, maybe in-house arrangement. I think just by virtue of being Amazon or Google, a security breach will get more press. There are probably more unpublicized breaches in other data centers.

How will the technology decisions you make today affect the Nuxeo Platform in the future?
We made a lot of good choices when we started building the new Nuxeo Platform architecture. The technology choices we made at the time have enabled us to build a very advanced platform that fits well into the market today. We love technology and we are a technology-oriented company. We enjoy finding smart ways to build software. Our customers like that as well. Our goal is to improve every time we commit source code.

Right now we are gearing up for increased software automation. And with cloud deployment, how do you manage 10,000 instances of the software? So we are on the forefront of large-scale orchestration mechanisms for our platform. High levels of automation is one reason our customers choose us.

I noticed that you had us meet for this interview at the Brooklyn Coffee Roastery. Did this job turn you into a coffee fanatic?
I think Roland Benedetti did that. Well, New York and San Francisco both have great coffee now, and I was used to drinking good coffee in Paris too. I really like the locally roasted coffee you can get in these cities.

If you weren’t in Information Technology at all–if your life had taken a right turn at 17–what would you be doing now, do you think?
I truly love the software industry, so I think I would have found a way to do it. Technology is not a frivolous thing. It has revolutionized the world in our daily lives several times already. I love that, and I wouldn’t trade what I do for anything else. Besides being an artist, I think software is the only space where you can build something with very few initial resources. You can make something that allows people to be creative. Pharmaceuticals, for example, take a huge investment of time and resources before anything can get off the ground. What we do at Nuxeo is built with our brains and our fingers. In some ways, with software you can start with a blank page and build from there.