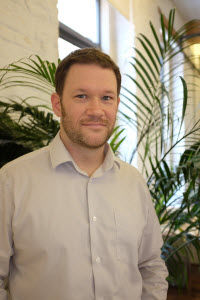 Stuart Miller, head of Customer Service for the US

It takes a dedicated, enthusiastic team to build and grow a company. Without that, it doesn’t matter how great the technology is. Nuxeo has brought on its latest team member, Stuart Miller, as head of Customer Service for the US, and he’s ready for the challenge.

Q: Tell us a bit about your background.

SM: I’m Canadian, but I wasn’t born there. I was born in Santiago (Chile) actually, but I also lived in Kingston (Jamaica), and Canberra (Australia) when I was a young child, then Ottawa (Canada) during my formative years, through high school. I studied at Queen’s University, in Kingston. But the moment I finished my studies, I moved to Silicon Valley. That was in 1995 - the cool exciting time for startups.

Back then, the dot-com boom was in full swing, and it seemed like everyone was working in IT. I actually started a company building interactive websites for companies - back in the days when building a website was not easy as there weren’t nearly the toolsets or platforms that we have available today. Then I joined a consulting company called Cambridge Technology Partners. I worked for them for 4 years, 3 of which were in San Mateo, California. From there I moved to Amsterdam for 6 years, where I founded a company called Anachron, Europe’s first e-invoicing SaaS platform (back then we called it ASP “Application Service Provider”). More recently, I had been living in Geneva, Switzerland for the past 9 years, where I worked at two software start-ups, the latter in the Swiss Private Banking sector.

Q: Most of your work experience was with technical teams, either as a CTO or a project manager. What were some of the things you did in those roles?

SM: I would say one of the reasons I was interested in this job [with Nuxeo], is because it is a customer facing role. When I worked in the US before as a consultant, it was always all about the client - it was all about marrying technology to business problems, but with a real focus on the customer. You felt like you worked more for the customer than your employer. I think that mentality is key.

I started out as a developer working on projects for Silicon Valley icons such as Sun, Netscape and Silicon Graphics. I grew into more of a Solutions Architect role, which requires understanding the business from a functional standpoint and bridging it to the technology, making sure the technical solution is the right match. I always enjoyed that role - leading technical people and understanding the business side.

Q: Where did you hear about the position with Nuxeo?

SM: My brother-in-law who works in Paris, where Nuxeo is based (my wife Marjorie is French), referred me to Nuxeo. When I had a look at the openings that were available, I saw this one based in NYC. I’ve always loved startups. I’ve worked at startups virtually my entire career, and although Nuxeo is not really a start-up, it has a start-up culture and atmosphere. I’ve always loved living in difference places too, and since I’d been in Geneva for 9 years, it felt like time for a change. New York was the right fit at the right time, and the company was absolutely the right company. It seemed like everything I was looking for. When I went for the interview in Paris and I met the Nuxeo team there, it was immediately obvious. Also, the technology is rock solid and that was a big part of the decision factor for me.

Q: Tell us about your role with Nuxeo?

SM: My role is head of Customer Service. It’s a two-part role. One is to build a first-class consulting team here, a small team of experts to help our customers implement the projects for which they have selected Nuxeo as their platform.

As the US market is growing so quickly for Nuxeo, our clients’ appetite for integration services grows too. In order to meet that demand, we need to build a team of highly skilled consultants. In France, in the rest of Europe, we have great partnerships with third party companies that do that for us.

The other part is the support side - making sure customers get the right level of support they need through one of our Connect contracts. The Nuxeo Content Services Platform is open source – our revenue comes from subscriptions to support, our online customization environment (it’s the piece of our platform that a lot of our competitors don’t have), and consulting services. This makes having first-class support and services critical to our success.

Q: How different is this new role from what you did before?

SM: It’s a little bit different in a few respects. The last company I worked at or four years was a software vendor in the private banking industry in Geneva, where I was managing client implementations. But that company was a product company without a dedicated team of consultants, and no third-party integrators, That’s a real challenge, because an integrator is a different kind of person than a developer - different mentality, different approach, different skill set. I wanted to work in a small company again, and I also really wanted a customer facing role. With Nuxeo, I have the autonomy to build out a team that is separate from the development team. It is a natural extension to what I have done before.

Nuxeo was founded in France and part of the core development team is based in Paris. The fact that I speak fluent French and that I am a native English speaker with some prior work experience both in the US and in Europe, was a good match.

Q: You said there’s a big difference between a developer and an integrator? Can you explain?

SM: The developer is all about the platform. There was an article I read, coincidentally on the airplane on the way over here (Stuart arrived in the US Jan 21), in the Economist called “A Cambrian moment.” If you haven’t read it, it’s interesting and worth reading.

If you are familiar with the Cambrian period - 540 million years ago on Earth life exploded because all the basic building blocks were finally in place from an evolutionary standpoint. They are calling today’s tech boom a Cambrian moment because what didn’t exist in the 90’s during the dot-com bubble were all the building blocks that are in place today. All the frameworks, all the APIs, all the platforms that make building an application or service today much much easier than it was.

Nuxeo has one of the pillars of those building blocks - the content management platform. I think part of the attraction for me joining Nuxeo, is that the tech platform is solid. Now it requires a very skilled set of people to build a product that is as solid and flexible as ours is.

Today’s Cambrian moment in IT requires both: the building blocks (the developers) and the people who build solutions with them (the consultants).

Q: Has your family moved with you to the US?

SM: Not yet. I left my wife and my three children in Geneva for now - they are waiting for me to find schools and an apartment here first. The trick about moving to New York with a large family is the schools. My kids are aged 12, 10 and 6, so I need to find good schools for them, and a home in the neighborhood. That’s the second job I have for the time being. I expect they’ll move to New York before the middle of March.

Q: Do you have bucket list for your time in New York (play wise)?

SM: Oh Gosh, no I think the bucket is too big. I haven’t even thought about it. I know there is an enormous amount of things I want to do here.

The first thing I did a couple of weeks back that was really fun, was install this smartphone app called “Bands in Town” which analyzes all your music and tells you the cool bands that are coming to your local town. Well, when I set that town to Geneva, Switzerland, there were not a lot of concerts recommended for me. But as soon as I changed it to Brooklyn, New York, there were like 150 concerts listed. Seeing a few of them is definitely on my bucket list.

And take my kids to a hockey game - ah NHL hockey!. Finally! I haven’t followed hockey since I left the US back in 1999. In Europe, although hockey itself is popular, you don’t get the NHL coverage easily.

SM: I guess I would have to say the Montreal Canadiens, but come on, I’m living in New York now, so go Rangers! 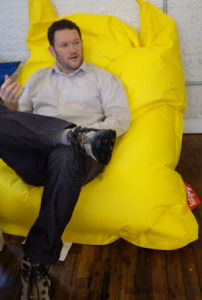 Q: What are the first few things you need to get to work on to get things in place?

SM: I need to take stock of all the customers we have based here, see how they are doing in their projects. My job is to keep them happy so I need to make sure their projects are on track, going well, see where they need assistance, if any, and make sure they are happy with the level of support they are getting.

It’s a big role, but when you have technology that is as solid as Nuxeo’s platform it makes servicing our customers all that much easier. We also need to continue to build out our consulting team both here in New York, and Los Gatos, California, where we also have an office.

For someone who’s only been with Nuxeo for a little over two months, you certainly have a strong grasp of the platform and what’s needed to drive the company forward.

SM: I think maybe that’s because of my background. I started a company before and I know the process. I was also CTO of the company I founded in Europe, and from a technology standpoint I love what we are doing at Nuxeo. And our CTO, Thierry Delprat, is a genius. He really understands how to put together a fantastic content management system architecture that is flexible, and robust – the ultimate platform building block.

There is an old Harvard Business Review article from 1993 called “How Architecture Wins Technology Wars” about why the IBM PC became the dominant platform for the personal computer. When you have an open, pluggable, compartmentalized architecture like the PC was (using off-the shelf components and an open architecture), you have a more successful platform.

I find Nuxeo is very much this - it’s open and pluggable and we use a lot of third party products to constitute our platform. And each of those is pluggable. That gives us significant longevity, significant advantages over the competition, and the community is responding to that, they are actually playing a role in how it evolves.

That’s a fantastic base to start with when you have a platform that solid. If we add to that first-class services & support and keep our customers happy, then we have a big role to play in the Cambrian explosion that’s happening in IT today.

Blog Tag: Meet the Team
×
Hi! Nice to see you