Studio 2.17 Has Been Released: User Experience as a Priority

As we had announced at the Nuxeo World, our priority in 2014 is user experience. Studio is now quite mature in terms of what you can configure with it and deserves improvements in usability. This release is the first one in a series that will address usability. The full release notes are available in the Studio documentation space. 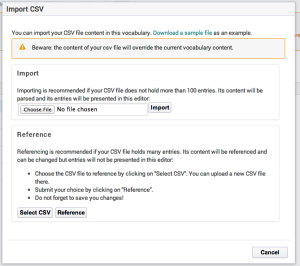 Some customer projects get to be very big, with hundreds of objects. Some workflow definitions are also themselves getting very big, with dozens of nodes and as a consequence, the loading time of the project was getting longer and longer. Anahide took a series of measures for preventing this problem: improved serialization of the project definition on the client side (remember Studio is written in GWT, most of it happens client side), lazy loading of the biggest features (workflow, automation chain, vocabularies), optimization of the vocabularies feature, with a new “CSV reference” mode, see just after.

Referencing Vocabularies in a Separate File

You can now upload a CSV file as a resource and reference it as the source of the values for your vocabularies, instead of displaying it as a tree in Studio. That option is much more robust for larger datasets (some customers upload vocabularies with tens of thousands of lines, causing the server-side controls to take too much time).

The MVEL expressions that are used are checked server side. If you make a typo, a syntax error, or forget a bracket, Nuxeo Studio now tells you there is a problem (it displays what you would have seen in the logs deploying and testing your automation chain). We hope this enhancement will save you a lot of time! Note that it doesn’t evaluate the expression though, as that would require more context information. At least you are sure your expression is valid and can be built at runtime. The implementation of this feature was interesting, as we discovered an optimization problem with the way MVEL engine was evaluating some of the expressions (particularly the ternary expressions), leading to an exponential time increase of the validation. A patch was submitted by Florent to the MVEL project and has been accepted. 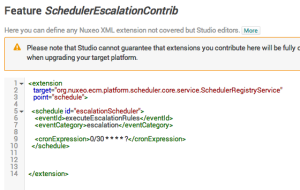 Integration of CodeMirror in Studio has been started. You can check it out on the Theme feature when editing a CSS, on the XML feature and in the in-line JavaScript definition of the Select2 widgets. CodeMirror offers syntax highlighting, code suggestion, and some auto-completion (for instance if you type). Suggestion appears by typing ctrl+space. That is a great step forward in the implementation of the auto-suggestion in Studio. Stay tuned, more will come on this topic in the next releases, such as NXQL validation. This is very exciting!

When you use the often unknown “documentation” feature for commenting a chain, it is now automatically unfolded, so as to make it more visible. Actually, in one of the next releases, we will make this documentation placeholder available on all the feature instances of your project.

Some bugs were fixed as usual, like double creation of objects when validating the creation with keyboard and missing properties of some of the newest widgets.

Lise prepared mockups for Automation screen improvements. The goal is to improve readability of the chains, especially when they get complex – you want to be able to read the parameters values easily. Do not hesitate to comment on the ticket, this should be implemented in the next release, around mid-April!