Present and Future of Nuxeo Automation, the Business Logic Module of Nuxeo Platform

Today we will talk about the “Business Logic” area of the Nuxeo Platform - the “Nuxeo Automation” module.

Nuxeo Automation provides an engine that knows how to execute operations and chains of operations. An operation is a granular instruction that “does something” in the platform. The core part of the platform exposes a set of operations, and each new module can (and should) also expose its own list of operations.

You can read a full introduction on Automation on the Nuxeo documentation site.

Strengths and Weaknesses of Nuxeo Automation

After four years, we start getting good feedback on Automation. Among the likes, we have:

Improving the Edifice Stone by Stone

We are working on all that feedback. 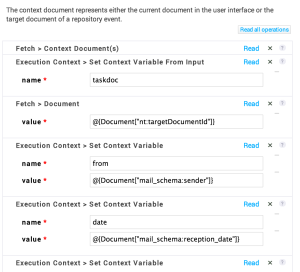 Experimenting on a Long Awaited Feature

One of our consultants, Michaël, has recently come up with a concrete prototype of a long time expected feature. He has tooled up the implementation of pop-ups that display forms that are submitted to automation chains. The result is available on GitHub in the labs area. It already helps a lot although it is not yet in the supported platform. No doubt the roadmap will eat it some day.

One of the great things we would like to do is to add a new binding to automation, besides REST, Workflow, UI, etc.: a script binding! Instead of using script in automation, what about binding automation to a scripting environment ? Thierry Delprat, our CTO, has recently made a more concrete proposal on that one. The plan is to provide a scripting sandboxed environment. In this environment, the only way to call a service of the platform would be via a bound operation. That way, looping, conditional and input/output type handling would be made much easier. It could look like:

We are pretty confident this approach will meet with great success and would be yet a new way to leverage this great module!