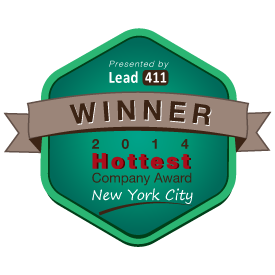 Lead411 is a technology and research firm providing news and data about US companies. They scour the web looking for information about the fast growing companies and for the last five years have turned this research in a series of “hottest companies” awards.
The 87 Hottest Companies in New York City for 2014 came from a list of over 1400. Nuxeo finds itself among other winners such as: Mashable, Datadog, Movableink, Enigma Technologies, WorkMarket, OutBrain, Spotify and more.
To make the list of the Hottest Companies in New York City, companies had to be in Software, Wireless, Internet, Hardware, or Media industry and be a privately held organization, and be within New York City Region. In addition, they must have either US$2M in funding the past two years or have a 100% increase in revenues over the past two years.
In September, 2013, Nuxeo received US$ 3.8 million in funding from OTC Asset Management and OTC Extend to support expansion in the U.S. market. The company also had a prosperous 2013/14 fiscal year seeing a 40% increase in global subscription revenue and an annual renewal rate of 101%. In addition, US subscriptions grew 77%, confirming the market demand for a platform-based solution for building content-centric applications.
“We are very excited to be awarded as one of the hottest companies in New York City,” said Eric Barroca, CEO Nuxeo. “The team at Nuxeo works very hard to deliver a content management platform that supports a wide range of business applications, and this had paid off not only in an increase in new customers, but continued satisfaction from existing customers.”
“Our 2014 award winners might be our best selection ever,” said Tom Blue, CEO of Lead411. “It seems like there is no better time to be a tech entrepreneur. There are so many startups succeeding right now and it is reflected in these awards.”